The Melaka Straits Mosque, also known as Masjid Selat Melaka, is one of the most beautiful and noteworthy mosques in Malaysia. Built on the man-made Malacca Island (locally called as Pulau Melaka), the mosque overlooks the Malacca Strait, one of the longest and busiest straits in the world.

The mosque has been open to the public since 24 November 2006, and the opening ceremony was performed by Tuanku Syed Sirajuddin, the Yang di-Pertuan Agong or the Supreme Head of Malaysia. It took around MYR10 million to build this magnificent mosque.

Located on the southern shore of the 40-hectare man-made island, Melaka Straits Mosque is a true testament to Malay and Middle Eastern craftsmanship. Though the overall structure bears a modern Islamic design, the main dome has a more Middle Eastern vibe.

The façade is adorned by stained glass windows that feature traditional Islamic motifs, a brilliant shade of gold colors the dome, and the unusual minaret resembles a lighthouse. The mosque is built on stilts, and during high tide, when the water level is just right, it looks as though the mosque is floating on the ocean!

How to Reach Melaka Straits Mosque 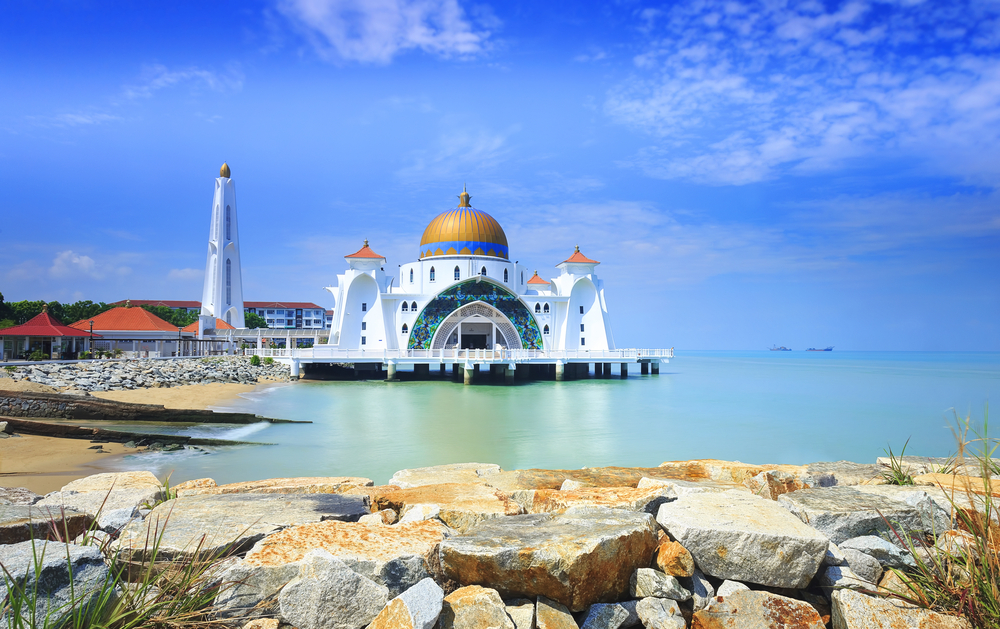 Depending on your exact location, the Melaka Straits Mosque can be anywhere from 3 to 6 kilometers away from the centre of Malacca City. The mosque is situated on the man-made island called Pulau Melaka, and it is a rather secluded place.

If you are in Malacca City, getting to the mosque should not be a problem. However, you might not have a lot of choices when it comes to transport. There are no buses or trains to the island or the mosque.

The best way to reach the mosque is by taxi, but it is an expensive option as fares are rather high. For a cheaper alternative, try the ridesharing app called Grab. If you are feeling adventurous, you can also rent a bicycle and ride to the mosque.

What Not to Miss at Melaka Straits Mosque 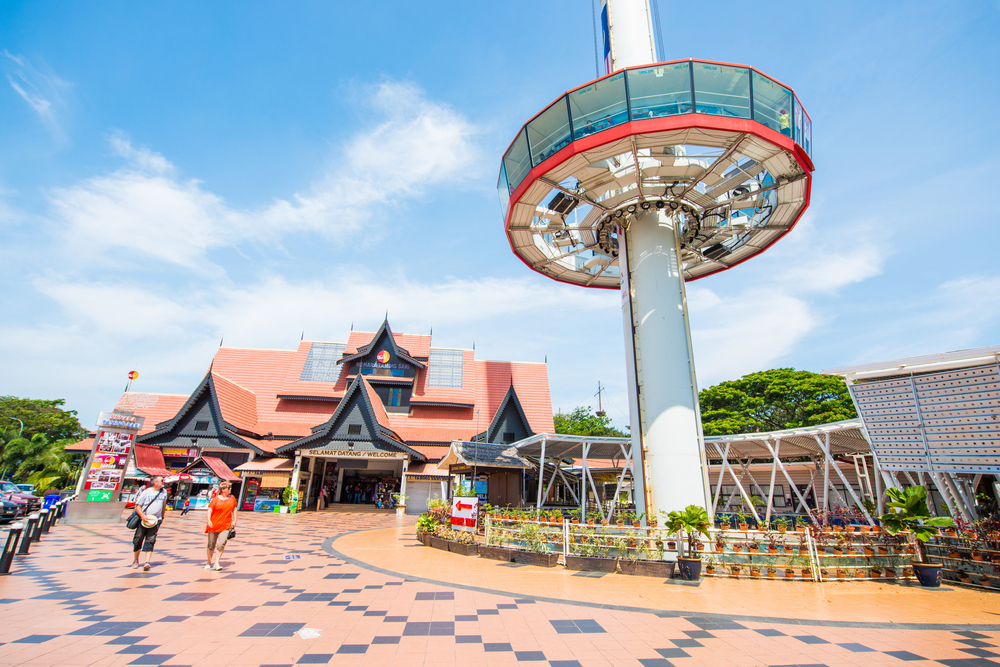 Wondering where to go after seeing the Melaka Straits Mosque? There are a number of tourist destinations near the mosque. Some of the most notable ones are:

1. Menara Taming Sari: Located 3.2 kilometers away from the mosque, the Menara Taming Sari, also known as the Taming Sari Tower, is a revolving gyro tower. The 110-meter tall tower has been opened to the public since 2008. It fits 80 passengers and offers a 7-minute ride.

2. Middleburg Bastion: The Middleburg Bastion is located 3.7 kilometers away from the mosque at the opening of the Melaka River. It was built in 1660 as a way to fortify the walls of Malacca City. The historical significance draws many tourists.

3. Dutch Square: 3.8 kilometers away from the mosque lies one of the most beautiful areas of Malacca city. This colorful spot is adorned by terracotta-red colonial styled Dutch buildings. There is also a central fountain that is made of ornate Victorian marble.

Things to do near Melaka Straits Mosque 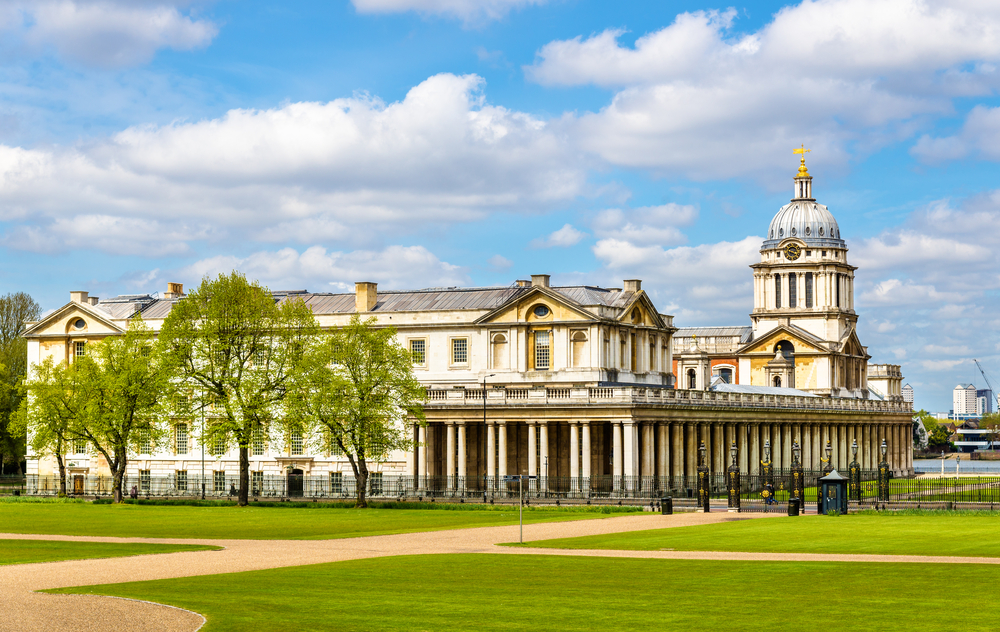 If you are one for activities, there are plenty of things to do near Melaka Straits Mosque. Here are our top picks:

1. Check out the exhibits at Maritime Museum: The Maritime Museum, locally called as Muzium Samudera, is the most popular museum in Malacca and it receives around 20,000 visitors per month. It is located 3.4 kilometers away from the mosque. The museum's main exhibit is the 34-meter high replica of Flor de la Mar. 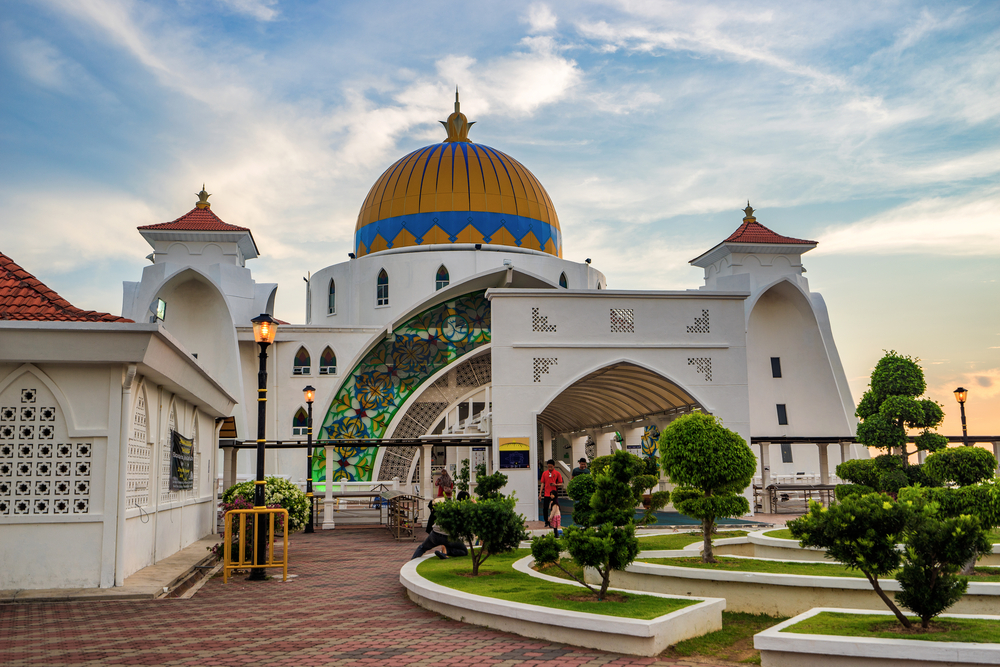 The Melaka Straits Mosque is a popular destination among locals and tourists alike. If you are in Malaysia for the first time, having the following information will make your visit to the mosque more enjoyable.

1. Location - The Melaka Straits Mosque is located on the southern shore of the Malacca Island, which is part of Malacca City. The address to the mosque is – Jalan Pulau Melaka 8, 75000 Melaka, Malaysia.

3. Entry Fee - You can enter the mosque for free.

4. Photography allowance - Photography is allowed and no additional charges are required. 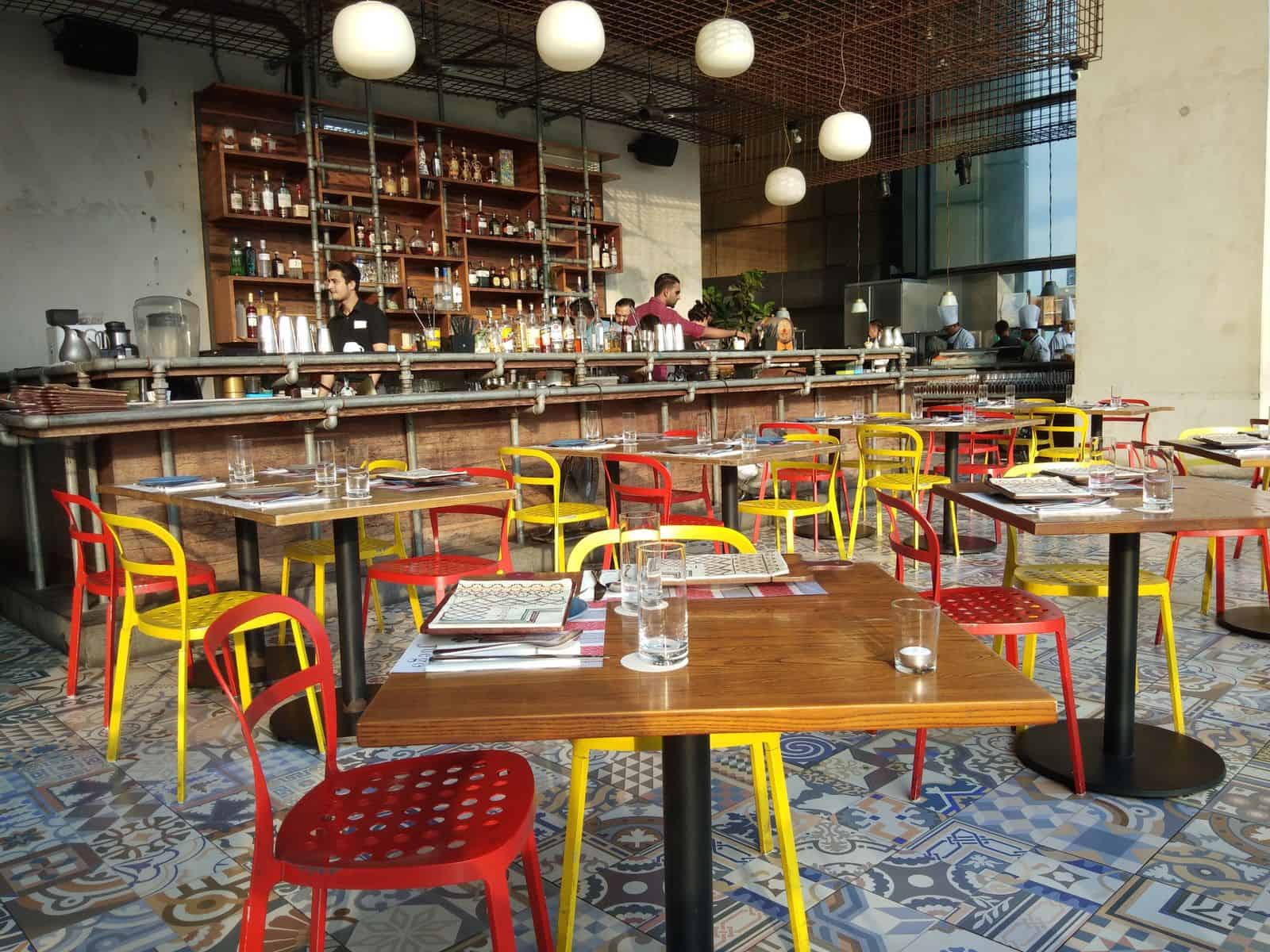 If you are planning to spend a day exploring the area, you need to know about the popular eateries too. Here are some of the best places to eat near Melaka Straits Mosque:

1. Nasi Lemak Ujong Pasir: The café is located 3.2 kilometers away from the mosque, and it is known for serving Malaysian, Asian, and Korean cuisine. It is most famous for the dish called Nasi Lemak Kukus. Make sure to call in advance and get bookings. Since it is a popular restaurant in the area, food often gets sold out by 9 p.m.

2. Restoran Aunty Lee: This family-owned restaurant is located 4.2 kilometers away from the mosque. It is known for serving Peranakan/Nyonya cuisine, and you can expect to find some delicious and authentic Nyonya food here. Popular dishes include Beef Rendang, Keluak, Ayam Buah, and Udang Masak Nanas. 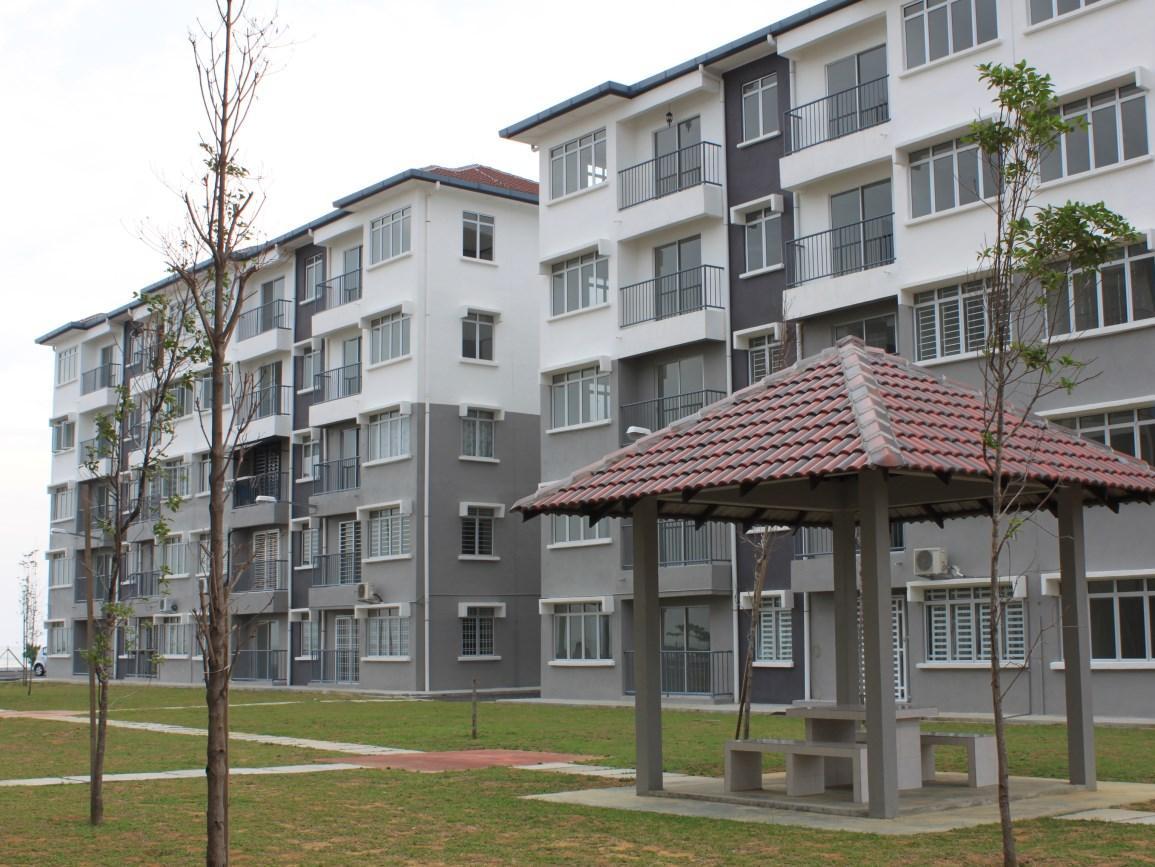 Here are some of the best places to stay near Melaka Straits Mosque:

1. DaHong Island Apartment: A 4-minute walk away from the Melaka Straits Mosque, the 3-star apartments will provide you a "home away from home" feeling. Each apartment comes with amenities such as stovetop, refrigerator, kitchenette, flat-screen TV, electric kettle, air conditioning and much more.

2. The Platinum Hotel & Suites: This 3.5-star hotel is only a 6-minute walk away from the mosque, and it offers amenities such as clean and spacious rooms, free WiFi, air conditioning, breakfast buffet, dry cleaning service, daily housekeeping, laundry facilities, and luggage storage.

3. Moty Hotel: If you want to treat yourself to some luxury, the Moty hotel would be your best pick. This 4-star hotel is only 3.5 kilometers away from the mosque and offers amenities such as an indoor pool, sauna, steam room, air conditioning, free WiFi, beautiful rooms, and much more. 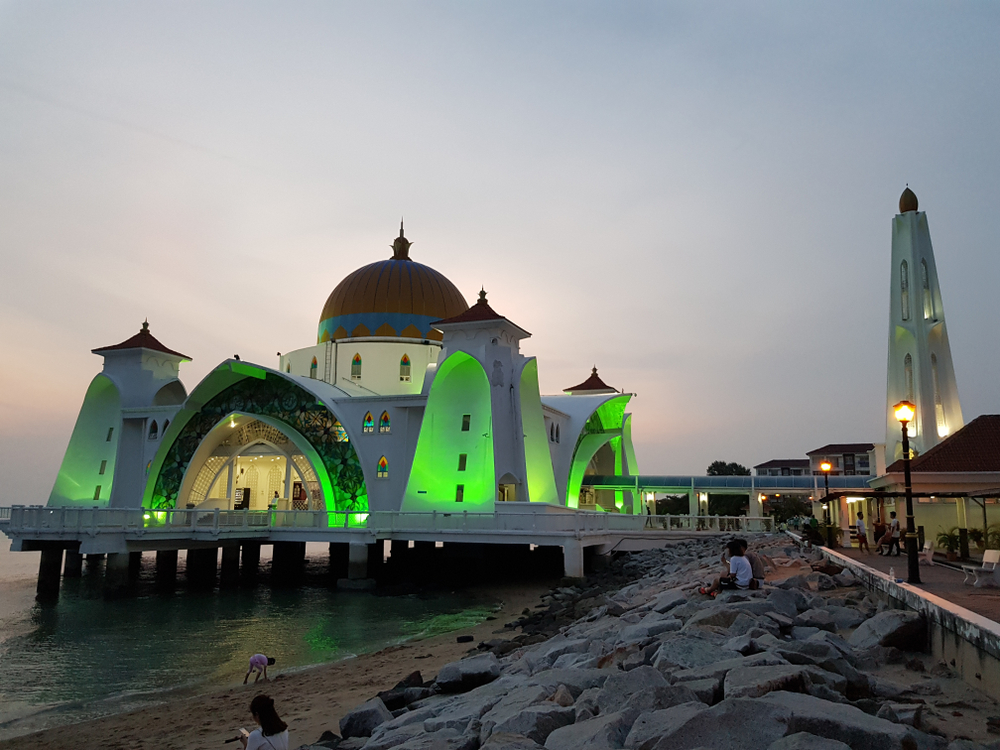 The Melaka Straits Mosque is open seven days a week, and the mosque stays open from 9 a.m. to 5 p.m. If you are not planning to get inside the mosque, you may visit the area any time of the day. The mosque is known to look beautiful at night. 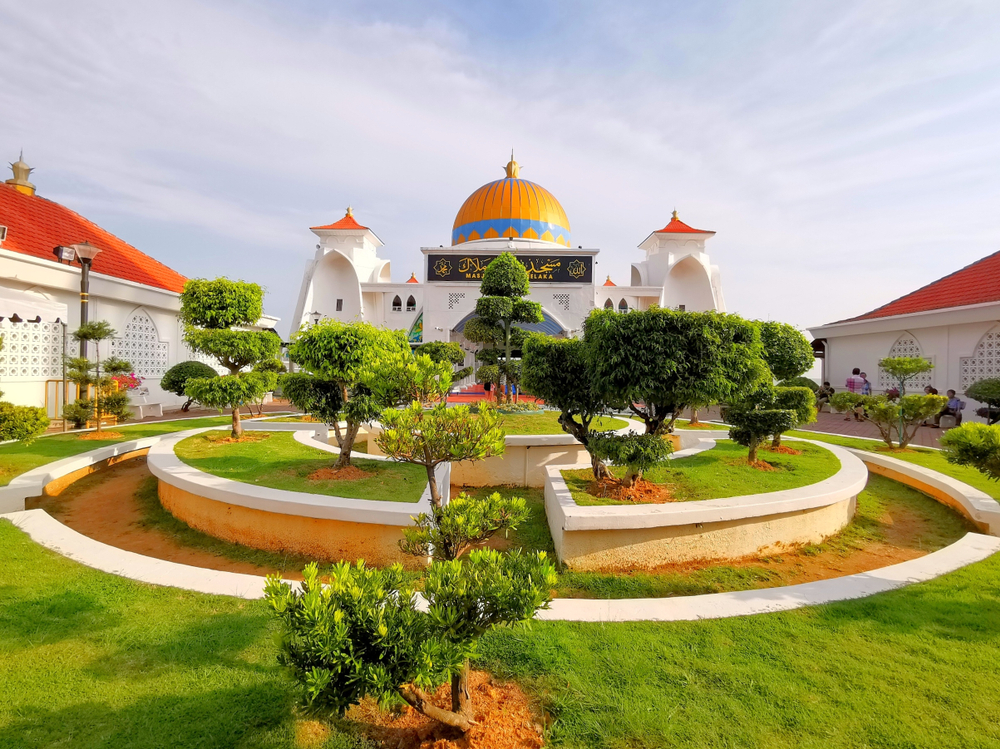 Despite being situated on the remote man-made island, the Melaka Straits Mosque offers decent mobile connectivity. 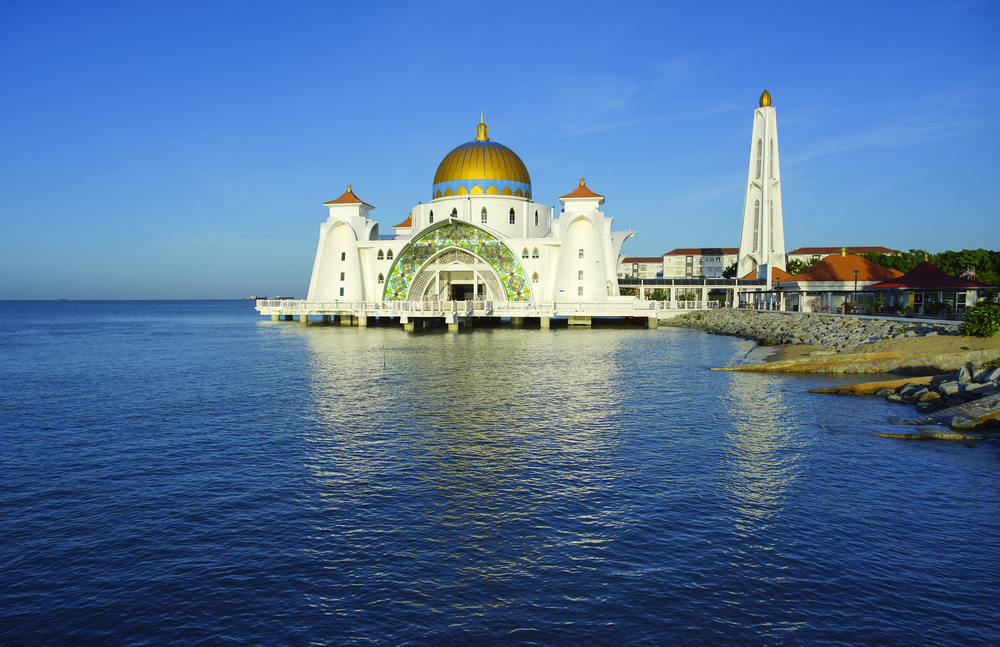 If you are visiting the mosque for the first time, make sure to remember the following tips:

1. Always be respectful and maintain decorum when inside the mosque.

2.Talk in lowered voice and never be loud.

3. Remove shoes before entering the mosque.

More Things to do in Malacca City

Popular Nearby Places Around Malacca City