Kerala is a gastronomical delight, luring people with its delicious cuisines. If you love food and enjoy experimenting, then you will have a gala time in Kerala. There is something for everyone, so if you don’t like spicy or highly flavorful dishes, you can always try something else. The cuisine in Kerala accepts everyone – vegetarian and non-vegetarian.

The food in Kerala is closely linked to its culture, demography and history, and even if you taste the same dish in north Kerala and south Kerala, you will be able to distinguish a marked difference in them. Let’s go on a food journey and touch down on some of them:

Image by Triv.rao via Wikimedia

Appam is a type of pancake made with rice flour, coconut and yeast, with a dash of sugar and salt. Some people add toddy or coconut water to add a special flavor and ferment the batter. Stew is made in coconut gravy with a medley of vegetables. You can eat the combination as breakfast or dinner. If you like non-vegetarian stew, you can ask for chicken or mutton. The pancake, made with crispy round edges is an absolute delight.

Suggested Read: 75 Must Visit Places in God’s Own Country

Image by manojkumar chidambaram via Wikimedia

Puttu is also a main breakfast dish made with rice flour, ragi, wheat, corn or any powdered grain. Scraped coconut is added to the mix, and the whole concoction is then steamed in a metal puttukutti (a long elongated or small bowllike vessel).

This dish is then paired commonly with egg roast, chickpea curry or green peas curry. Some people just like to eat puttu with sugar or palm sugar and bananas. That is also a yummy combination in itself.

Dosa is a thin crispy crepe made using fermented rice and black gram. Once the dosa is made, masala is spread on it and then it becomes masala dosa. This is a hugely popular dish in Kerala and can be had from any restaurant.

This is usually consumed with a couple of chutney varieties and sambar. Some people prefer to have this without the masalas, as it is mostly made with potatoes and contains a lot of carbs. In that case, you can try pure ghee roast.

Idli sambar combination is highly popular in Kerala. It is typically traditional and healthy (no oil at all) with a steamed batter of rice and black lentil combination. It is also called fluffy rice cake and should be consumed steaming hot. You can have this traditional breakfast dish from any restaurant in South India, not just Kerala.

Image by Rahul Sadagopan via Wikimedia

Pazhampori or banana fritters is a popular 4 o’clock snack in Kerala. The aroma of the banana fritters getting fried in hot vegetable oil is undoubtedly irresistible. It definitely puts on some unwanted calories, but you must have a couple when you are down in Kerala. Pazhampori is made with plantain (locally known as ethakka) and maida flour.

Image by Kalyan via Wikimedia

Uzhunnu vada is also known as Medu vada, and is a popular 4 o’ clock snack. Some people have it along with breakfast as well. The hole in the vada makes it look like a donut, but this delicacy is not sweet at all. It’s not, however, entirely healthy as it is fried in oil. Have it with chutney and sambar if you like it that way.

Spicy chicken curry is a common favorite dish in Kerala. Chicken is prepared deliciously with onion, garlic, chilli, coriander and vinegar and served on a banana leaf. This perfect comfort food can be had with rotis, chapattis, parottas, bread, appam and so on.

One hangout worth mentioning when you are touring Kochi is Mullapanthal. It’s a place you must explore because you can try a variety of Kerala traditional food at Mullapanthal. 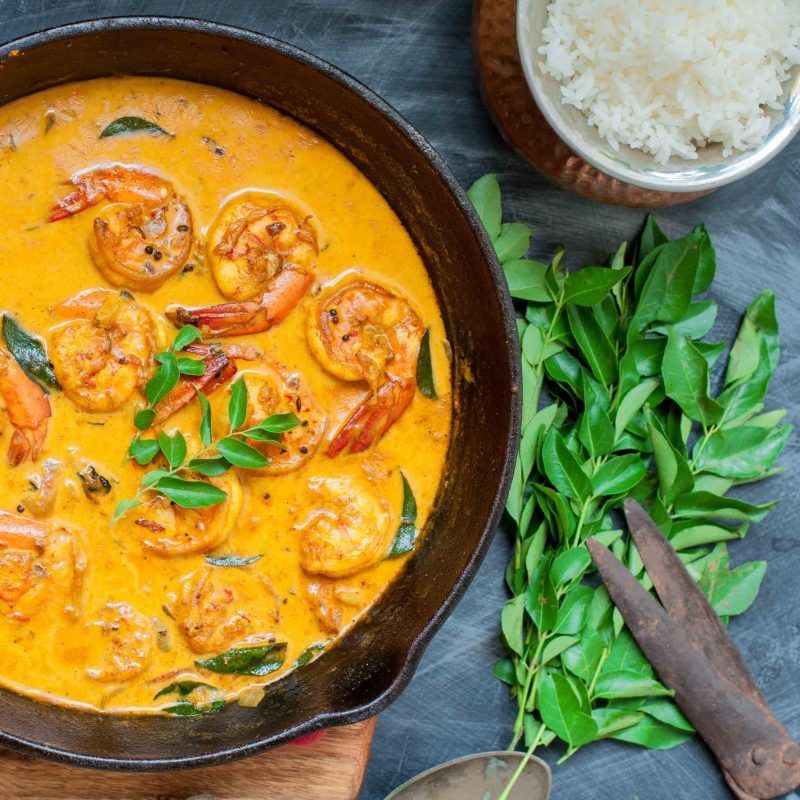 Cooked with fresh spices and coconut, prawn curry is a must when you are visiting Kerala. Pair it with roti or rice, but have it you must. It’s going to give you a kick, but in the right sense.

Kappa is tapioca and when cooked with coconut and spices, it becomes irresistible. People pair it with beef curry to take the taste to a different level. The taste will play on your tongue long after it’s gone.

Image by  English Wikipedia via Wikimedia

Come to Kerala and you cannot go back without savoring the different varieties of Biriyani. Made with flavored rice and a horde of spices, you can try any variety of biriyani when you are here. The more popular biriyanis are chicken, mutton, prawns and fish biriyani. You can also try out egg biriyani and vegetable biriyani. Absolutely a lip-smacking dish! Ask for Malabar biriyani, and indulge in a feast to the senses!

Image by Drsoumyadeepb via Wikimedia

A delectable fish curry made with coconut milk and pepper! Try it with chapattis, appam, freshly prepared bread or roti, and you will never forget the heavenly taste. Fish moilee is easily available in the restaurants in the coastal area.

There are many stories on the history of avial, the most popular one being that it was a dish conceived by Prince Bheem of Mahabharata epic when the Pandavas were in exile. The dish is made with a melange of vegetables sliced and diced to perfection with coconut and tamarind added to delectable consistency. Avial is a must in the traditional Kerala Sadya (feast served on a banana leaf during occasions and festivals).

Marinated pearlfish or Karimeen cooked to perfection on a banana leaf is an absolute delight. This traditional preparation can be had with rice, or as a standalone dish.

Image by Pooja Kabirdas via Wikimedia

Palada payasam is the classic dessert served at the end of the meal. It’s made with ada, cashew nuts, palm jaggery or sugar and milk. Payasam is another version of the South Indian kheer. If you visit any home in Kerala during Onam and Vishnu, you will definitely be served with at least one glass of this heavenly delight. If you decline, it’s your loss.

And on that sweet note, let’s wipe off our plate. The rich varieties and flavors of Kerala, with a fusion of Malabar, Arabian, English, Jewish and French influence make it all the more special. Each dish is an experience in itself. Go on this culinary ride, and even if you put on a few pounds, it would be worth it.

2 months ago
Around the WorldFood & Travel

8 months ago
AdventureAdventure JunkiesAround the World

9 months ago
Around the WorldFood & TravelTop 15

Live Your Dream in Dubai on a Traditional Dhow

Read More
Live Your Dream in Dubai on a Traditional Dhow

Unique Villages to Explore on Your Next Thailand Trip